Part 1: Rigging the System is Profitable

While millions of Americans struggle to pay for their prescription medication, big pharmaceutical companies reap $600 billion in annual profits.  $116 million is spent on direct lobbying, and with a 77,500% return, the investment certainly pays off.  Profits have been bolstered by pharmaceutical companies’ myriad of policy wins.  A well-funded barrage from lobbyists has created patent protections, limiting competition from lower-cost drug options, and, not surprisingly, price protections built into federal policies.  By comparison, when you look at the return of individual investors, multinationals, and the oil industry, we see a stark contrast:

by JLMC.
Explore more infographics like this one on the web’s largest information design community – Visually.

Senior citizens–without blue chip stocks, without millions in expendable liquidity for political campaign contributions–average a meager salary of $22,000. The influence of money has certainly trumped the voices of the citizenry in the halls of Congress. Just look at the recent collapse of a federal gun violence bill and the influence of the gun owner lobby over the cries of the general public.

An income of $22,000 a year is hardly a fighting chance against the lobbying power of Big Pharma.  Many seniors struggle to pay for food, rent, and heat, let alone afford the sticker price on their medicines.  Drug companies, meanwhile, can spend billions in campaign contributions, PR, and advertising to ensure that their voices are heard over those of ordinary Americans.

And it certainly has been. The industry owns the story being told in Washington DC and the mainstream media.  (We tell a different version at hookedonpharma.com)

The tale that big drug companies have successfully spun is one of despair, hardship, and weak patent laws that no longer serve to protect the financial gains of private enterprise.  It runs like this: pharmaceutical companies are American institutions.  They produce life-saving drugs.  This innovation takes a lot of time and costs a lot of money.  Prices are set where they are for a reason, and people who use these drugs should pay for them.  Generic manufacturers are already able to take away name-brand profits when patents run out.  If you take away the “free market” structure of programs like Medicare Part D, pharmaceutical companies will collapse.  It is in the nation’s best interest to leave price controls in place to preserve a “life-saving” American institution.

The story is horribly fatalistic, and geared to churn the better nature in all of us.  And when told by pharmaceutical industry lobbyists who outnumber members of Congress 2:1, the narrative has taken parable status in recent years.  By targeting hundreds of millions of dollars on key members and committees, pharmaceutical companies have gotten their way in the majority of almost 1500 bills in the past eight years.

Medicare Part D is no exception.

Congress passed Medicare Part D, a prescription drug “benefit” program for seniors, in 2003.  This may initially sound like a blessing for seniors, but, among other pitfalls, the bill prevented Congress from negotiating drug prices under Medicare.  Instead of ensuring that Medicare 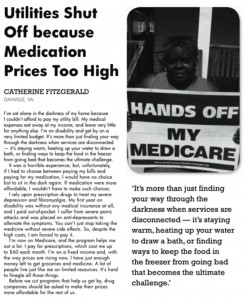 participants can afford prescription medication, the legislation made certain that pharmaceutical companies could maximize profits.  Immediately following the passage of the legislation that saw $116 million in lobbyist strong-arming, the same companies increased prescription prices and saw profits skyrocket.  America’s seniors are footing that bill in part through the Medicare Part D “doughnut hole,” a period when Medicare stops paying for prescriptions and the individual must pick up the “market-rate price” for their medicines.

The so-called free-market drumbeaters would have the country believe that any negotiation amounts to government intervention in the market. What they are saying is that they don’t want American citizens and taxpayers to be able to negotiate a better contract with the pharmaceutical industry.

They have created a Free Market Red Herring in the process. 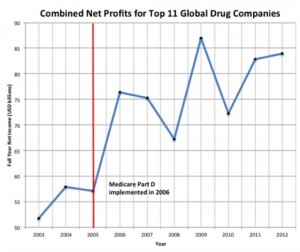 When in doubt the opposition cries free market foul play. Part D was engineered and pushed through by companies, not American taxpayers. The clause against allowing negotiated prices was the one piece that held higher-than-market prices in place, thereby guaranteeing a direct flow of taxpayer dollars into the profit columns of the industry.

What business would accept contracts term like these? “I am offering you a horrible deal, ensuring you lose on every transaction. You’ll take it and there’s nothing you can do about it.”

Screaming “monopoly” doesn’t work here: patent holders are conveniently protected against anti-trust proceedings.  And technically, there are a lot of pharmaceutical and biotech companies throughout the country so consolidation can’t be used as a factor either.  But when competitors collude to rig a piece of legislation so that there is no recourse or correction, the nation has a problem.  Or so they would have the nation believe.

The fact is, there are commonsense solutions Congress can enact right now, and ones that will save benefits for seniors, cut costs for taxpayers, and do little to hurt the profits of Big Pharma, despite their rhetoric.

Under the Medicare Drug Savings Act introduced by Senator Rockefeller of West Virginia, Medicare could save $140 billion over 10 years. Some analysts estimate that the nation would recover between 2% and 7% of the subsidized profits if Congress required drug-pricing negotiations in Medicare.

Pharmaceutical profits jumped nearly overnight after Medicare Part D was enacted in 2006.  And since 2005, big drug companies have seen an almost 50% increase in profits.  Big Pharma has successfully scared the public into believing their profits are necessary for the common good.  Yet, while profits continue to skyrocket, and drug prices have significantly outpaced inflation, Big Pharma drug innovation is on the decline.  In fact, studies indicate that taxpayers, not pharmaceutical companies, are funding most of the research leading to major medical breakthroughs.  Sounds like Americans can afford to miss out on the same allergy medicine in a different color and another t.v. commercial.  But apparently $552 billion in remaining profits and a 50% tax write off for research and development expenses are just not enough to motivate someone to help sick people.

Instead of being concerned with Big Pharma profit margins, Congress needs to ensure that seniors receiving Medicare get the best quality and most affordable healthcare they can receive. Medicare Part D is not a comprehensive solution, but is certainly a bad policy and one that was enacted under the collective boot of 1,100 Big Pharma lobbyists, constructed to pad the pockets of the drug industry. It’s time to make a change.  Congress can and should make Medicare drug coverage work for people, not Pharma. 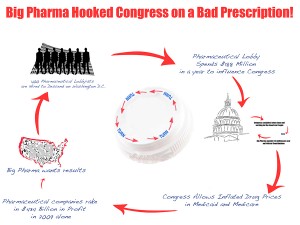 This system of negotiations is not just an abstract concept with theoretical implications.  Its success has been shown in numerous organizations and other countries.  For example, the Veteran’s Administration (which negotiates prices with pharmaceuticals) is able to obtain the top 10 drugs covered by the plan at a price 48% lower (on average) than Medicare.  Other wealthy nations that negotiate pharmaceutical prices pay 150% to 300% less than Medicare.

It seems clear that Congress, by refusing to save seniors and the average American taxpayer money, worries more about profits than the people it was elected to represent.

The Alliance for a Just Society affiliates met in Washington, D.C. to address their Congressional leaders in the Senate and drive home the need for senior-first policies and to prioritize freeing Medicare to negotiate prescription drug prices.  To bolster the voices of these delegates representing 20 states, the Alliance delivered a national petition, signed by 350 organizations, dozens of legislators, and nearly 8,000 Americans, to the Senate.  The simple demand: allow Medicare to negotiate prescription drug prices. Unfortunately, the bill introduced by Senator Rockefeller has yet to make it past congressional committee, where many good bills go to die.  This is where Americans should renew their efforts: get the bill out of committee, and give the Senate a chance to vote.

Republicans and Democrats may not agree on much, but both sides of the aisle can agree that a good government considers the needs of its citizens.  A good government allows individuals to thrive.  So many seniors have worked the majority of their lives to provide for themselves, their family, and the prosperity of the nation.  Now is not the time to turn our backs on them and to profit off their illnesses. It is time to make it possible for all Americans to retire with dignity.