What Women Won with the ACA: What the Nation Should Celebrate

What the nation has now, under Obamacare, is coverage for the many costs of being a woman—medically speaking:

Previously, state-by-state coverage allowed employer-based coverage to decide whether premiums would be higher, whether preventive services or even family planning services would be covered by an insurance plan. For women on Medicaid, prenatal and maternity services were covered if a doctor was willing to accept Medicaid.

In theory, the ACA would fully do away with those disparities. The Medicaid option would become normalized and strengthened. Doctors could not walk away from providing medical services just because they didn’t want to accept Medicaid reimbursements. In practice this will only occur if insurance plans receive federal dollars or participate in health exchanges.

As of September 2010, pre-existing conditions were no longer allowed to bar a person from receiving health insurance. Despite the law, insurance companies, bided their time as the court case filtered its way up to the Supreme Court. And finally, following news coverage in 2010 of breast cancer survivors being denied coverage and being subjected to lifetime limits in coverage forcing insurance companies to quickly their practices.

It didn’t hurt to have the Supreme Court uphold those provisions in the law.

Furthermore, in America maternity care has become one procedural charge after another, often leading a new mother to pay upwards of $10,000 for a conventional delivery, $15,000 for a C-section. Ensuring that birth doesn’t bankrupt a new mother was a major imperative in crafting healthcare reform. (NYTimes)

“Only in the United States is pregnancy generally billed item by item, a practice that has spiraled in the past decade, doctors say. No item is too small. Charges that 20 years ago were lumped together and covered under the general hospital fee are now broken out, leading to more bills and inflated costs. There are separate fees for the delivery room, the birthing tub and each night in a semiprivate hospital room, typically thousands of dollars. Even removing the placenta can be coded as a separate charge. (NYTimes)

In states like Louisiana 70 percent of the births are paid for through Medicaid: in Texas, 56 percent. Neither state, among the 25 states refusing the program, will take responsibility by participating in Medicaid expansion—leaving the onus for covering uninsured women to the federal government. (nearly a fourth of all women ages 0-64 in both states are currently uninsured.)

Then there’s birth control. While it may not have been doing away with the Hyde Amendment, the ACA did give women more control over their reproductive choices at significant levels. The law did away with co-pays on contraceptives. It made family planning a requirement of every insurance plan on the market, even employer-based coverage has to include this provision.

But as we have seen with the refusal of states to participate in expanded Medicaid programs, private companies that this provision is a violation of their First Amendment Rights. Auto parts manufacturers, religious social service agencies, hospitals and others are fighting this provision; some on the basis of religious beliefs; others on the belief that employers should be able to make reproductive choices for their employees.

And so the noise over who controls women’s bodies continues, but the contraceptives still come without a co-pay.

What is more enlightened in the ACA is the emphasis on community health clinics. 40 percent of community health centers, even in geographic areas where the number of Limited English Speakers are few have, on average, 30 percent of their clientele needing bi-lingual services. What that means is longer visit times and the need for culturally competent care to be provided throughout the community health networks. And most of these clinics have raised the bar on medical services, often moving populations not used to preventive medical practice into longer-term, less expensive care.

The opportunity for cultural competence in medicine to become more and more the practice in the national funding regime warrants a celebration all on its own.

Americans waited with trepidation as the U.S. Supreme Court ruled on the Affordable Care Act last year. Opponents of the law were banking their first salvo against health reform on a strike down from the court. One graphic told the story that millions of proponents saw to be true—( Image to the right)that the ACA would in fact transform healthcare for millions of women seemingly overnight; in fact, all women receiving preventive care, maternity care, family planning and preexisting conditions. 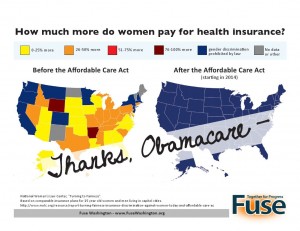 “The Affordable Care Act helps stop health problems before they start. These historic guidelines are based on science and existing literature and will help ensure women get the preventive health benefits they need,” said HHS Secretary Kathleen Sebelius.(Gothamist)

In many ways the ACA changed the focus of healthcare from treatment to prevention.

Yet, with conservatives attempting to dismantle the comprehensive nature of these historic changes, the nation, it would seem, needs a constant reminder of how serious the health costs for women have become, and why it is more important than ever to remain committed to health reform. More importantly, remaining focused on reducing health disparities in our health systems that have defined for our country whose health is or is not valued.

The real fight it turns out wasn’t the lawsuit against the ACA; it would be the piecemeal policy-effect of a conservative House of Representatives, the abject reluctance of conservative governors and state legislatures, and a seeming unwillingness of ACA framers to stand by their policy victory. The Court ruling that states were not required to participate in the federal Medicaid expansion was a bigger blow to the legislation than many people realized.

Without a public option, Medicaid expansion would represent the only incentive for insurance companies to enter the affordable coverage markets (exchanges). The state of women’s heath, while certainly on firmer ground in terms of receiving coverage, will be better than it has ever been — but only if coverage options exist.

It is the uninsured population that the Affordable Care Act was intending to find coverage after all and while the fight to keep the law intact will certainly continue, Americans need to reflect on the opportunities created by the legislation.

The legislation passed both houses and was signed into law by the President; the Supreme Court only struck down one of the provisions. Even with that setback some of the nation’s most conservative governors agreed to expand Medicaid coverage to their uninsured residents. What is disheartening is the Obama Administration’s repeated concessions on implementing the law.  For example, the announcement that there would be a delay in implementing provisions to require employers to offer health plans to their employees will have huge ramifications for uninsured Americans. We still have 25 states that are either refusing to provide expanded Medicaid coverage for their uninsured populations or leaning against it — some as mentioned above won’t even take responsibility to run their own health exchanges.

The out-and-out rejection on political and ideological lines isn’t without costs. Politically, Americans can quickly turn their disenchantment on the legislation itself. Should the reforms not succeed for everyone, the chances are that the malaise will spread. The only people caught in the fray are the same ones the law was intended to support: the uninsured, 20% of whom are women ages 19-64.

We cannot remind ourselves often enough that the Affordable Care Act did more to even the gender playing field than any other piece of healthcare legislation. Unfortunately, the nation cannot measure those changes; yet.

What we can anticipate is a renewed fight for the right to health care.