Sherrie Chapman found a lump in her breast. A prisoner in a California Corrections facility, Sherrie persisted in demanding an examination by prison medical personnel. Her pleas were not answered until 9 years later, when lumps were visibly protruding from her breast.  Even after receiving a mammogram that revealed immediate follow-up tests were needed, medical personnel denied Sherrie personnel any sort of additional testing including a biopsy, ultrasound or fine needle aspiration.

She eventually underwent two mastectomies.  Subsequently, staff ignored her chemotherapy appointments and confiscated her medication. She filed a lawsuit against the prison, received a settlement of $350,000, but sadly, at the age of 42, Sherrie died in prison from the cancer she fought so tirelessly to beat.

Her death was one of many, among other violations against women and men, which forced the California Department of Corrections and Rehabilitation to be under federal court supervision. “In California, inmates’ health care has been under federal court supervision for the past six years after a judge found that the state failed to provide inmates with adequate medical treatment.

The state’s department of corrections tried in May to re-gain the right to oversee the system but was refused by a federal judge, who said the department must first demonstrate it is able to provide adequate medical treatment.” (Kaiser Health News)

For women incarcerated in private prisons, there is often no oversight of the medical services they do or do not receive.

Crime is on the decline, and for profit prisons need to fill beds somehow in order to maximize their income.  Facilities for incarcerated women are easy to market.  Like undocumented immigrants and children (whose incarceration rates have also risen), women are low-risk detainees.  A gentler facility, with high return rates is an easy sell.

For profit prisons have pushed for contracts with minimum accountability that allow them to understaff facilities, and hire ill-trained, inexperienced, and often corrupt employees.  Let’s be clear that they also pay lower wags, don’t provide proper benefits to employees and the working conditions are not so great either.

The industry can save even more money by offering fewer services and housing inmates in deplorable conditions. Quite distasteful and deplorable is the private prison practice of choosing which inmates they will take, like a state-run auction block, often opting for women with less health risks, no chronic illnesses or without pre-existing conditions.

Unfortunately for women, this multi billion-dollar industry has punished them in unimaginable ways.  Many have suffered sexual assault and physical abuse from staff, prolonged solitary confinement, and medical neglect and violent employees have killed an alarming number of prisoners.  As mentioned in the first post of this series, asthma should never be a death sentence.  One’s sex should not determine the chances of their survival either.

Private prisons have their industrial strategy set in stone.  Spend millions lobbying and marketing to ensure a system that maximizes profits.  And then, spend as little money as possible on the “goods” (human beings) you’re purchasing to further increase revenue.  And if conditions ever become so atrocious that an outsider recognizes what you’re doing, don’t worry, the government will step in to fix things on the taxpayer’s dime.

A study in 2009 reported that incarcerated women were almost 8 times more likely to have cancer than incarcerated men.  Out of every 10,000 incarcerated women, 831 had cancer, compared to 108 per 10,000 men. Of those, 91 of every 10,000 women behind bars reported having had or currently having breast cancer. Given that 114,979 women were behind bars at the end of 2009, this would mean that over 1,000 women have had or currently have breast cancer. (Truthout.org) 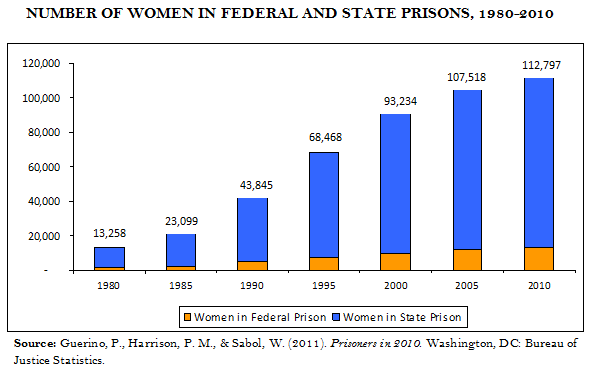 Despite the alarming rates of cancer, screening measures are virtually non-existent, and women are not provided any information or basic education on how to perform self-examinations.  Even women who know they have cancer while entering prison, have telling symptoms, or are at high risks are denied basic tests.  Some studies have indicated that as many as 70% of women who should have had mammograms never received one.  And, if a woman is “lucky” enough to obtain a diagnosis, chemotherapy, radiology, and other care, including pain alleviation, are sporadic or non-existent.

All prisons, publicly operated or private have been working to reduce their costs. Contracting out to private medical providers has added another layer of accountability grey area, offering prisoners a Deep Water Horizon scenario about whose fault it is when their illnesses go untreated.

With the passage of the Affordable Care Act, prisoners are supposed to receive coverage under an expanded Medicaid program. The program would include mammograms every two years for women over the age of 40. Additionally, they will receive coverage for sexual abuse and domestic violence counseling. Mental health screenings will be covered as well.

Under the Eighth Amendment to the U.S. Constitution prisoners are guaranteed adequate health care. To refuse is to subject them to cruel and unusual punishment. The ACA, while seemingly redundant here, actually created the means to uphold the requirements of the Eighth Amendment, but now it is a question whether or not the law will be implemented as states refuse to expand their Medicaid programs.

Despite The ACA and the Constitution, in terms of women’s health coverage in prisons, the reality looks pretty much the same as it did before the law was passed: bleak.

The disproportionate ratio of incarcerated men to women has frequently, and successfully, been used as an excuse to disregard the numerous issues affecting women prisoners.

But female incarceration rates are skyrocketing.  Between 1977 and 2004, the number of women serving sentences greater than a year rose by 757%. However, women are especially hit hard by laws that are imprisoning them at rates increasing double to that of men.

Women are committing fewer violent crimes or abusing drugs is on the decline, but policies regarding drug offenses, including mandatory sentencing, have only grown harsher.

Increasing poverty rates coupled with an already appalling wealth gap leave many single moms struggling or unable to provide for themselves and their families.  Additionally, studies estimate that approximately 94% of incarcerated women have histories of prior sexual and physical abuse.

Sherrie Chapman’s story should have had a different outcome. She should have had her right to a fighting chance against the cancer that was destroying her. Unfortunately tragic variations have been told from prison-to-prison nationwide. Medical neglect in prisons is certainly not limited to any gender or race; public or private prisons.  But considering women are the fastest growing prison population, and considering the immense profits made from their incarceration, it is time to address violations of their fundamental human rights.  Corporate profits do not account for the unnecessary loss of human life.