A simple premise behind every law that gets created: No one should live in fear. The laws we create should support that basic assumption by reducing crime. But when laws have no bearing on crime rates, yet become the very source of fear that people live with, we have crossed the Constitutional boundary, and law enforcement itself becomes the source of fear.

New York City’s Stop and Frisk law is one of the in-depth discussions the Alliance will lead this October at our 5th Institute for Pragmatic Practice symposium. Students, activists, organizers, policymakers and scholars will address the increase in racially charged, discriminatory and dehumanizing practices by law enforcement; actions reinforced by new ever-more draconian laws; and the increased boot print of prisons and detention centers on the everyday lives of Americans.

On August 12, 2013, a federal court found the ‘Stop and Frisk’ law to be a gross violation of public trust, racial profiling and constitutional rights. Leroy Downs was a plaintiff in the case.

It was early evening when the two White officers approached him.  Leroy Downs, a Black mid-thirties man, who simply standing in front of his home, had the random misfortune of catching Officer Giacona and Officer Mahoney’s eye.

The officers were driving past Leroy’s home and saw a metal object in his hand. The officers suspected illegal drug activity and stopped to inquire.  One officer said in an aggressive tone that it looked like Downs was smoking weed.  “Get the [XXXX] against the fence,” the officers ordered as they pushed Leroy backwards penning him in.  Leroy tried to explain that he wasn’t smoking weed. He tried to tell the officers that he was actually a drug counselor; that he was just getting off of work, and had been talking on his cell phone before he saw their cop car pull along beside him.

But the officers refused to listen.

Instead, they patted Leroy’s clothing down in search of drugs and weapons.  The officer’s hands went up along one leg—nothing there.  He tries the other, and then pats down Leroy’s torso.  Still, the search yields nothing.  But the officers don’t stop looking.  One of the officers reaches into the front of Mr. Downs’ pants pocket. Finding no contraband, he searches the back pockets; this time removing its contents: a wallet, keys and a bag of cookies.   Desperate, he even checks inside the wallet— all clear.

Just as quickly as they had appeared, Officers Giacona and Mahoney began to walk away giving no apology, no explanation of why he was suspected of smoking weed. Mr. Downs was left to wonder as they just walked away.  When he protested against their misconduct, the officers simply laughed him off and said he was lucky they didn’t lock him up.

Leroy wasn’t laughing; nor was the federal court Judge Shira Scheindlin who enjoined the New York Police Department’s controversial Stop-and-Frisk policies and concluded that stops similar to Mr. Downs’ experience soared in number over the last decade as crime continued to decline.  These stops demonstrated a widespread disregard for the Fourth Amendment, which protects against unreasonable searches and seizures by the government, as well as the 14th Amendment’s equal protection clause.

In explaining the Court’s rationale, Judge Scheindlin stated in her decision: 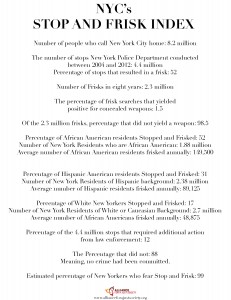 “While it is true that any one stop is limited intrusion in duration and deprivation of liberty, each stop is also a demeaning and humiliating experience.  No one should live in fear of being stopped whenever he leaves his home to go about the activities of daily life.”

The Fourth Amendment of the United States Constitution protects all individuals against unreasonable searches or seizures.  The caveat to this protection is provided through the Supreme Court which permits police to “stop and briefly detain a person for investigative purposes if the officer has a reasonable suspicion supported by articulable facts that criminal activity may be afoot, even if the officer lacks probable cause”

Judge Scheindlin found that New York police officers similar to Officers Giacona and Mahoney failed to have reasonable suspicion.  The officers seized Downs based on a glimpse of a small object in Down’s hand from the window of their passing car.  They failed to even have articulable facts.

Contrary to the protections afforded under the Constitution, policies like New York’s Stop and Frisk simply required one thing: you have to “target the right people for the right stops.” In practice, the policy encourages the targeting of young Black and Hispanic men based on their prevalence in local crime complaints.  As the court aptly noted, this is a form of racial profiling.

If the unwarranted frisk itself wasn’t bad enough, the systemic targeting of people by race brings the Stop and Frisk policy to a despicable low.

The Equal Protection clause of the Fourteenth Amendment guarantees to every person the equal protection of the laws.  It prohibits intentional discrimination based on race.  Because there is rarely direct proof of discriminatory intent, circumstantial evidence of such intent is permitted.  The impact of the official action—whether it bears more heavily on one race than another—may be considered.

While officers are allowed to continue the practice of stop and frisk procedures, the policies of the police department will be scrutinized to ensure they are following the constitutional protections.  To address the violations, Judge Scheindlin has ordered remedies, including but not limited to, a trial program requiring the use of body-worn cameras; and a community based joint remedial process to be conducted by a court appointed facilitator.

Cities across the country just like New York battle with law enforcement policies to harmonize the need for safety with the will of liberty.  Two goals often in tension must learn to coexist.  Improper Stop and Frisk policies dehumanize the victims of the act, and strike fear and distrust in the communities.  Judge Scheindlin aptly noted:  no one should have to live in fear of being stopped going about life’s daily activities.  Restoring humanity against policies that intrude upon the public’s well being at the upcoming symposium will be a discussion not to miss.

[The Alliance for a Just Society and Union Theological Seminary will convene organizers, scholars and activists from across the country in New York City to address the dehumanizing practices of law enforcement and the effects mass incarceration has placed upon ordinary people. “Cell Blocks and Border Stops” will be held October 17 – 19, 2013 and is the fifth symposium held by the Alliance’s Institute for Pragmatic Practice. Click HERE to register!]