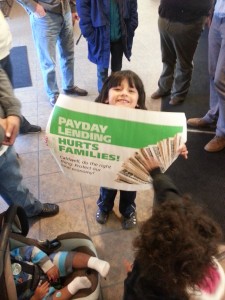 predatory loan businesses continue to swarm into our state.  Last year alone, payday loans accounted for a negative economic impact of $1 BILLION! http://www.insightcced.org/uploads/assets/Net%20Economic%20Impact%20of%20Payday%20Lending.pdf  This is money that our communities lost, nationwide.

Volunteers and members of Idaho Community Action Network went into the neighborhoods of Caldwell and gathered 400 signatures from families who both see and personally experience the impact of payday and title loan businesses.  The canvassers met families; families who have lost their only vehicle; families who lost their home; their job and even their children, because they needed help.  They learned about loved ones who died owing a debt to a predatory lender.

Together these families are asking for a simple zoning ordinance to limit the location of any new payday or title loan center.  To make them less visible and less accessible, the plan is re-direct any new businesses out of poor neighborhoods an 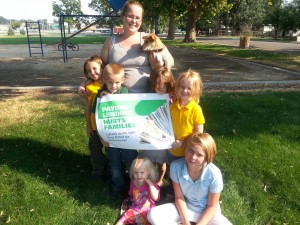 d other populated areas and place them in industrial zones.

Caldwell has an unemployment rate higher than the state and national averages and with a population of just over 45,000 people. Yet there are close to 20 payday loan centers listed in and around the city. ICAN circulated the petition and continues to address the unfair and advantage payday companies have with unlimited interest rates.  Idaho falls prey to these predators as surrounding states chase these loan sharks away with interest rate caps and strong regulation.  ICAN members support a rate cap at 36% following federal limits for active military.

The Caldwell City Council members heard testimony last night from residents trapped by predatory loans offered by payday companies. Residents are looking for a zoning change that would, “would restrict payday and title loan centers, potentially keeping new centers from opening up in the center of town.” (Northwest Cable News, 10,7,13)

According to the FDIC, “Payday loans are small-dollar, short-term, unsecured loans that borrowers promise to repay out of their next paycheck or regular income payment. Payday loans are usually priced at a fixed-dollar fee, which represents the finance charge to the borrower. Because these loans have such short terms to maturity, the cost of borrowing, expressed as an annual percentage rate, can range from 300 percent to 1,000 percent, or more.” http://www.fdic.gov/bank/analytical/fyi/2003/012903fyi.html

What happens next is often the deepest cycle of debt a borrower could imagine. Most lenders do not accept partial payments on the debt, so if the amount borrowed cannot be paid off in its entirety, then borrowers are encouraged to renew their loan. By making interest only payments, borrowers roll the loan over until their next payday. Once the borrower reaches the end of the loan extension, he or she is again presented with the option of renewing it again. Idaho regulation does require the loan to be paid off after 3 extensions, however, a new loan can be immediately offered, creating a

The effort to restrict where predatory centers can operate at the city level is just the first step in the ongoing fight to limit payday loans in Idaho.  The real 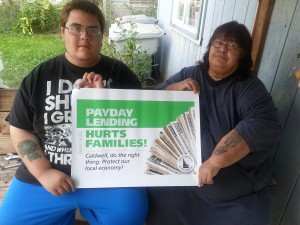 solution is to outlaw these defective products by enacting a statewide rate cap at 36%.  Eighteen states have enacted rate caps of 36% or less.

For more information on the fight against payday lending in Idaho check out our report here.