A showdown happened in the streets of Washington D.C. on March 8 between the millions of people across the country tired of money ruling their health and those who would try to bring down health reform. On that day, 25 survivors of health insurance abuse led hundreds of activists from NWFCO affiliates and grassroots groups across the country on a march through the streets of D.C. to shut down the annual convention of the biggest lobbying group opposing health reform, America’s Health Insurance Providers (AHIP). 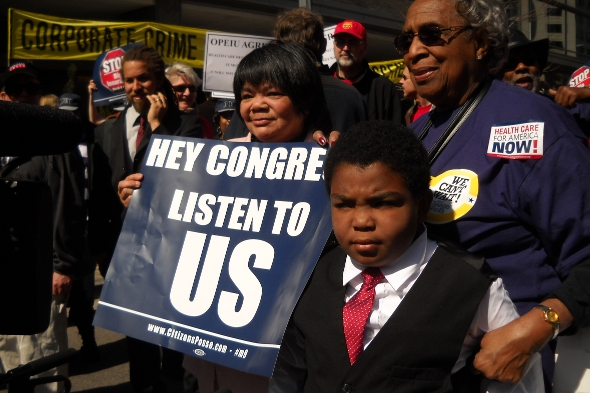 The marchers convened on the hotel where the meeting was taking place. There, activists rallied on the street and in the tunnels leading into the building. The entire scene was wrapped in crime tape symbolizing the crimes against America’s health that the insurance industry has perpetrated for years. Activists were then deputized and a citizen’s posse was formed to make a public arrest of the top insurance CEOs inside the hotel.

While security stopped the posse from delivering the arrest, the message of the day was clear: America is tired of the insurance industry profiting off of our health, and we’re not going to take it anymore!

The following day on Capitol Hill, those 25 leaders who had suffered some of the worst abuses at the hands of their health insurance sat down with lawmakers to share their stories, and to urge them to pass health care reform. The event, moderated by Wendell Potter, was a somber reminder of the needless suffering that has taken place under our current system, and of the need for reform now.

Eleven-year-old Marcelas Owens and his grandmother Gina Owens were among the insurance survivors who testified before their Congressmen. Their story is of a mother and daughter who was among the 45,000 people a year who die because they cannot afford health insurance. Tiffany Owens, Marcela’s mother, was diagnosed with pulmonary hypertension in 2006. Eventually she was too sick to work, lost her job, and her health insurance. Without health insurance she didn’t get the regular preventative care she needed to manage her illness. It was only in emergencies when she’d go to the emergency room, and eventually, it was too late.

Marcela’s story was compelling enough to be mentioned by his own Senator, Patty Murray of Washington, and also by President Obama. Watch Marcelas’s story here: http://www.youtube.com/watch?v=hQvQvrweBUI.

Also among the survivors was Mary Wallace, an attorney and activist from Southern Oregon who went bankrupt due to health costs related to her idiopathic pulmonary fibrosis. She is now uninsured and, as so, is unable to get on the waiting list for life-prolonging lung transplant. Read more about Mary here: http://www.mailtribune.com/apps/pbcs.dll/article?AID=/20100308/NEWS/3080307&emailAFriend=1

Alaya Wydhamm-Price, 28 year-old from Portland, Oregon also gave testimony at the forum. Alaya thought she had good insurance until she discovered that her periodic headaches were due to a much more serious problem, a brain tumor. She then also discovered that her insurance wouldn’t cover the surgery to remove it. Unable to work, she lost her insurance completely and has had to postpone the surgery until her family can find some way to afford the $60,000 procedure. Watch more about Alaya’s story here: http://www.kptv.com/video/22816402/index.html

From the Main Street Alliance in Illinois came Dan Sherry, a small businessman who suddenly found himself uninsurable because of high cholesterol.

The stories of folks like Marcelas, Gina, Mary, and Alaya and their struggles with the insurance industry are tragic and unjust to say the least. But what is most compelling about these leaders is their commitment for change. These courageous activists have been volunteering their time for months and years in their home states to push for progressive health care reform. These survivors have been to countless rallies, phonebanks, direct actions, and legislative visits to make sure other people don’t have to face the struggles they have.

The momentum for health care reform received a boost at the beginning of March, and by the middle of the month the President had signed comprehensive health care reform. The action at the AHIP conference, the face-to-face interaction between real community leaders and lawmakers at the forum, and the widespread media attention that Marcelas and his grandmother received, all played a large part in changing that momentum—and the eventual passage of the bill.