After reaching agreements with New York City hospitals to improve language access ((“What We Do: Promoting Health for All New Yorkers,” Make the Road New York, http://www.maketheroad.org/whatwedo_health.php)), MRNY members recognized the real danger of not being properly informed about their medication. They began a campaign to hold pharmacies accountable to federal civil rights law that already require health care institutions to provide translation services. Armed with personal stories and a 2007 New York Academy of Medicine (NYAM) ((Weiss L, et al, “Access to multilingual medication instructions at New York City pharmacies,” Journal of Urban Health, 2007 Nov;84(6):742-54, http://www.ncbi.nlm.nih.gov/pubmed/17926130)) report that documented the non-compliance of most chain pharmacies in the city, MRNY joined New York Lawyers for the Public Interest to file a landmark complaint against the pharmacy chains with the New York State Attorney General. 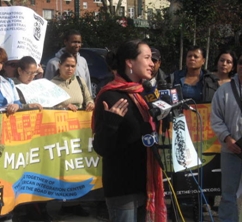 The Attorney General responded to the complaint and public pressure ((Anne Barnard, “Non-English Speakers Charge Bias in Prescription Labeling,” New York Times, October 31, 2007, http://www.nytimes.com/2007/10/31/nyregion/31pharmacies.html)) by interviewing affected MRNY members, and building a case against the chains (while all pharmacies, including the smaller “mom and pop” businesses need to provide translation, the personal stories and the NYAM report found that it was overwhelmingly the larger chains that were failing their non-English speaking customers).

Leaders also took the streets in press conferences, public hearings, ((“Immigrants to Flood City Council Oversight Hearing About Dangerous Lack of Translation Services at Pharmacies,” Make the Road New York, June 12, 2008, http://www.maketheroad.org/article.php?ID=600)) and protests to raise public awareness of the problem and, in one case, to refocus the attention of the AG’s office. The media attention ((Anne Barnard, “Non-English Speakers Charge Bias in Prescription Labeling,” New York Times, October 31, 2007, http://www.nytimes.com/2007/10/31/nyregion/31pharmacies.html)) from these events were key to maintaining the attention of the public and, of course, decision makers ((New York Senator John D. Sabini, “English-Only Prescriptions Are a Threat to Public Health,” http://www.maketheroad.org/article.php?ID=578)) at the local and state level.

Building on the Win 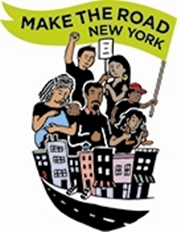 The next step in the campaign is to codify the settlement made by the AG’s office into state law. Already, MRNY is working with state legislators who have been inspired by the work done in New York City, and recognize that non-English speakers across the state face the same danger of not understanding their medication. The two demands for statewide legislation are: