While Congress was finishing debate on the historical health care reform bill, hundreds of thousands of immigrants and immigrant allies marched on the nation’s Capitol to demand another piece of critical progressive reform: Comprehensive Immigration Reform. Many of NWFCO’s partners participated in this incredible show of optimism and solidarity, including Nebraska Appleseed. 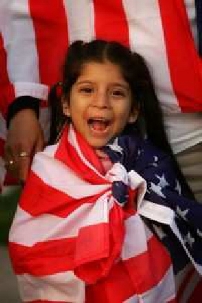 The Nebraska delegation consisted of immigrants, faith leaders, businesspersons, students, educators, and community leaders from towns large and small across the state. Representatives from the League of Nebraska Municipalities, many churches, the Hispanic Chamber of Commerce, and others traveled together–in some cases 42 hours by bus–in order to send the message that we need workable solutions that uphold our nation’s values and move us forward together.

In a videotaped address to the huge crowd, President Obama reiterated his commitment to comprehensive immigration reform and talked about a bipartisan bill that is about to be introduced by Sens. Chuck Schumer (D-New York) and Lindsey Graham (R-South Carolina). Representative Luis Gutierrez (D-Ill), Roman Catholic Cardinal Roger M. Mahoney of Los Angeles, NAACP President Benjamin T. Jealous, and other leaders and lawmakers spoke about the many ways a broken system harms us all.

Incredible support for comprehensive immigration reform also came at events and rallies here in Nebraska. On Sunday, March 22, over 600 people gathered at Our Lady of Guadalupe Catholic Church in Omaha for a Mass followed by speeches in support of comprehensive immigration reform. The First United Methodist Church together with Interfaith Worker Justice also hosted a prayer vigil attended by over 100 people who heard stories from immigrants about the need to pass reform legislation this year.

In Grand Island on Saturday, March 21, more than 300 people marched through downtown in support of immigration reform. ((Robert Pore, “Rally held in Grand Island in support of immigration reform,” The Grand Island Independent, March 20, 2010, http://www.theindependent.com/articles/2010/03/20/news/local/11606859.txt)) The sense of urgency for reforming our broken immigration system in order to keep families together was especially strong in Grand Island as people remember the raids conducted at the Swift packing plant in 2006. The raid resulted in children, many of them American citizens or legal immigrants, being separated from their parents. Reform advocates urged Nebraskans to remember immigrants’ economic contributions to our state and to reject attempts by elected officials to score political points at the expense of immigrants.

The momentum from these rallies and marches continued on Monday, March 24, as thousands of supporters of comprehensive immigration reform met with their members of Congress. Our group met with legislative aides from all five Representatives, as well as Senator Mike Johanns. Another faith-based delegation met with Nebraska’s elected officials as well. We shared our stories of how our broken immigration system tears families apart, hurts our state’s economy, and represents a lost opportunity to utilize the talents of Nebraskan youth who want to contribute to the health, vitality and entrepreneurial spirit of our state. We appreciate the time that congressional staff from each of Nebraska’s offices, as well as Senator Johanns, gave us to share our thoughts and concerns.

It is now time for President Obama and members of Congress to fulfill their campaign promises of meaningful immigration reform. For the sake of all Americans, we will take the momentum from the rallies and marches as well as our meetings with Congressional members and continue to advocate for workable solutions that uphold our nation’s values of acceptance and opportunity.