This year Uncle Sam pushed Tax Day back to April 18, giving us all a three-day tax filing holiday. It’s almost enough to make you feel warm and fuzzy inside. Until, that is, you hear about GE, which apparently is on extended vacation, paying essentially nothing in taxes for 2010 despite raking in $5.1 billion in U.S. profits and $14.2 billion worldwide. And who’s footing the bill for GE’s tax vacation? We are.

But that’s not all.  GE may be a trailblazer when it comes to tax dodging, cleverly using its corporate slogan, “Imagination at Work,” to skirt its tax responsibilities, but it turns out there are plenty of other bullies playing tax dodgeball on this playground.

Big oil companies (Exxon Mobil, ConocoPhillips) are high on the list of corporate tax dodgers as well. Even health insurance companies are in on the game.

Overall, US corporations paid federal income taxes at a rate of just 15 percent on their $1.5 trillion in profits in 2009.[1] How do they swing it when the nominal corporate income tax rate is 35 percent?

There are a variety of ways. GE’s approach: hire legions of lobbyists, former IRS and Treasury officials to bend the tax code to your advantage, create new loopholes and then exploit them. Other corporations use off-shore tax havens to shift profits around and avoid paying their taxes. According to a 2008 Government Accountability Office report on tax havens, health insurer Aetna had eight subsidiaries located in tax havens like Bermuda and the Cayman Islands; Bank of America had 115 subsidiaries in tax havens, including 59 in the Cayman Islands alone; Citigroup had 427 tax haven subsidiaries; JP Morgan Chase had 50; UnitedHealth Group had 11; and Wells Fargo had 18.[2]

How much money are the American people losing to corporate tax dodging? Estimates suggest that the U.S. loses close to $100 billion a year due to offshore tax abuses.[3] That would be a nice chunk of change to help close our budget gap and shore up important investments in infrastructure, education, and health, investments that provide the foundation for businesses to prosper and earn profits.

Of course, the real kicker in all of this is that when GE and Bank of America dodge their taxes, the rest of us – small business owners, families, anyone who doesn’t have the money to hire their own legion of lobbyists to carve up the tax code in their favor – end up footing the bill for them.

There’s finally some talk in D.C. about closing corporate tax loopholes and going after tax haven abuse. But so far that talk has been limited by the idea that corporate tax reform should be “revenue-neutral” – meaning it won’t raise a dime to help with the budget and deficit. Why should we accept a corporate contribution to our country’s revenues that is the product of massive tax avoidance? It makes no sense, and it’s still a giveaway to big business that our small businesses, families, and communities simply can’t afford. 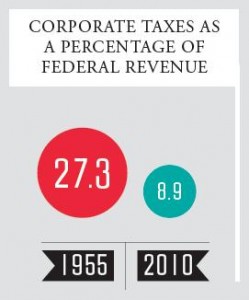 To put things in perspective, check out this illustrative graphic from the Demos “Taxes Matter” series (click here for the full chart). As the chart shows, corporate taxes made up 27 percent of federal revenues in 1955, under President Eisenhower. Today, they make up less than 9 percent – a three-fold decrease. Got a budget problem? Then close loopholes and end tax haven abuse so corporations will start paying their fair share again.

Of course, playground bully CEOs will throw a temper tantrum at this suggestion, making dire threats about the impact on their ability to grow and keep up with global competitors whose tax rates are lower. There’s just one problem with that: the effective tax rates of many of our global competitors aren’t lower. In fact, they’re significantly higher. 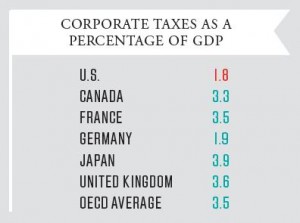 Another graphic courtesy of Demos: US corporate taxes as a percentage of our GDP are below Germany, Japan, and many other industrialized countries – in fact, they’re just half the average of all countries in the OECD (Organization for Economic Cooperation and Development). Demos’s David Callahan adds, “A recent study by the World Bank showed that the U.S. effective tax rate was below that of many of our top competitors, including Germany, Canada, India, China, Brazil, and Japan.” [4]

Illustrating this another way, this ProPublica article reports:

“Samuels [the head of GE’s tax department] said at a tax forum in February that GE needs a tax system that will let it compete effectively with giant, foreign-based multinationals like Mitsubishi, Siemens, and Phillips. However, their effective tax rates for earnings purposes last year were 40 percent, 31 percent and 26 percent respectively, compared with 7 percent for GE.”[5]

So this Tax Day and going forward, let’s have the debate about closing corporate loopholes and ending the abuse of offshore tax havens. And when you hear corporate CEOs (or the politicians who are beholden to them for their campaign contributions) trot out the tired line that they can’t afford to pay their fair share of taxes the way everybody else does, don’t buy it. It’s time to tell GE, Bank of America, and the other big bullies on the playground that their game of tax dodgeball is over. They’ve been eating our lunch for too long and we’re coming to take it back.

Special credit to David Callahan of Demos and his “Loophole Land: Time to Reform Corporate Taxes” article for raising issues covered in this post.