This is the sixth part in a series of posts that will explore some of the leading organizations from around the country that are engaged in unearthing and combating the influence of money in the political process.

Role in the Landscape

Public Campaign conducts campaigns to improve campaign finance laws and to promote public financing of elections. They offer research and messaging support to community organizations, focusing on connecting the dots between how elected officials raise money and the actions they take that hurt regular people.

Fair facts, voter blog and press room: all contain information about clean elections, including their success in states and cities that have adopted Fair Election laws, the status of federal clean money legislation, a link list of organizations studying the role of money in politics, research reports, and analysis of the news.

Research support: Public Campaign offers rapid response research on breaking news stories, including lobbying, campaign finance, and fundraising events for community groups. They conduct background strategic research to help with organizations’ campaigns, media strategy, and outreach. In addition, Public Campaign compares the disclosure forms of members of Congress with their position statements, searching for conflicts of interest. For example, comparing a lawmaker’s statements about global warming with their relationships to oil companies.

Teaming Up With Health Care For America Now! 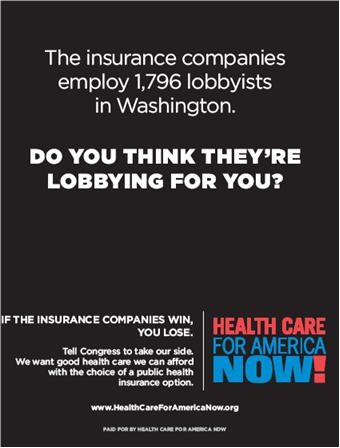 During the push for federal health care reform, Public Campaign worked with Health Care for America Now! (HCAN) to create a series of print, TV and, web ads exposing the private insurance industry’s bad practices and excessive greed. The ads made clear that if the insurance companies won and got their way in shaping health care reform, the American people would lose.

The two groups also created profiles of 80 members of Congress that detailed private industry contributions, revolving door issues, fundraising events, and any scandals associated with fundraising. This information was critical in creating the public materials showing how the industry or a company was using profits to influence policy.