The JP Morgan Chase office in Columbus, Ohio is surrounded by a moat—literally. But that didn’t stop five hundred Americans, organized by the New Bottom Line coalition, from finding a way across and storming the castle on May 17. Homeowners, community leaders, union members, clergy members and more converged on Tuesday’s shareholder’s meeting. Many dressed as Robin Hood to send a message: stop hoarding resources and pay your fair share! 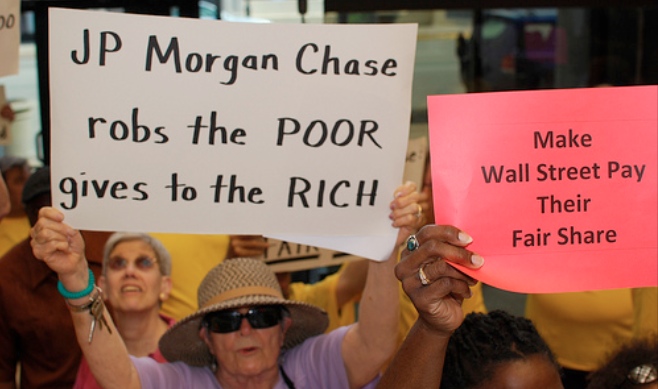 The day of action on Chase involved building a bridge to cross the moat to get to the shareholder’s meeting (held in one of the largest flat buildings in the country, second only to the Pentagon), the police macing peaceful protestors, and a direct confrontation between the people and Jamie Dimon, CEO of JP Morgan Chase. Tensions were high as Wells Fargo and Bank of America had already answered to angry protests outside their shareholders meeting in earlier weeks.

Member groups of the New Bottom Line are calling on Chase to do their part to clean up the economy they helped crash by paying their fair share of local and federal taxes. They are demanding that Chase start lending to small business, and agree to a strong settlement with Attorneys General investigation fraudulent foreclosure practices.

Take an inside look at the action here.