On Thursday, May 12, 20,000 community members from New York City and beyond descended on Wall Street. Mayor Michael Bloomberg had just released his budget which cuts 6,000 teaching jobs and slashes vital social services the city relies on while keeping in tact tax breaks for his billionaire friends and the corporations that house them. This scenario is becoming all too familiar on the local, state and national level—and working people have had enough. That day on Wall Street, an unprecedented number of organizations (including Alliance members who traveled from Washington and Idaho) came together  in belly of the beast to send a message to corporate America. 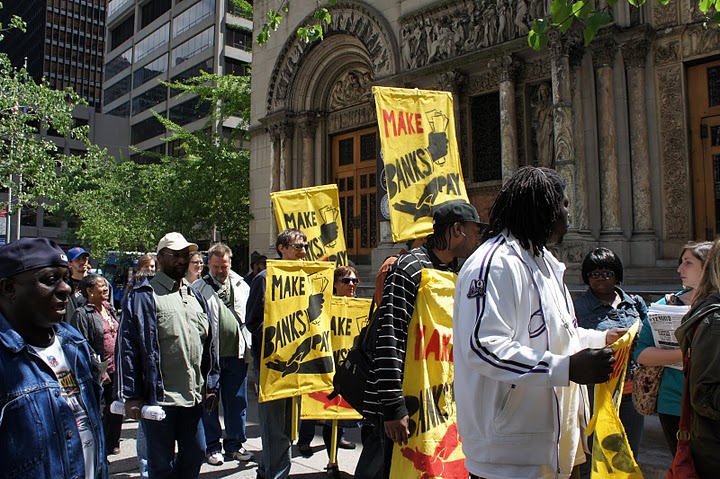 Students, peace activists, immigrants, transit workers, the unemployed, teachers, tenants, human service providers, and union members assembled in eight sights around downtown Manhattan. They also took to the streets and assembled to march down Wall Street where the world’s largest teach-in commenced, educating the public on the ways the big banks crashed the economy and put the burden of picking up the pieces on the backs of working families in New York and around the country.

The rally was the culmination of a week-long series of actions targeting corporations and big banks. On Monday, delegations of community members delivered letters to banks, financial firms, and real estate developers demanding that they pay their fair share of taxes before making a stop at the Real Estate Board of New York. Tuesday, a local teacher led a counter teach-in at a conference of private equity firms on reviewing ways to dodge taxes, and a group crashed a party held for House Speaker Bohener who was speaking to large donors at a ritzy hotel in Midtown. On Wednesday, a group of people  took a tour of the banks in midtown that are ignoring their responsibility to the city before making a stop at the Bank of America NY headquarters to deliver a message of corporate accountability.

The stage has been set for Mayor Bloomberg to decide whose side he is on, the people who elected him to office or his billionaire buddies getting rich off the public dime. May 12th was just the beginning of the fight to hold Wall St. accountable. To join in the fight visit the coalition’s web page at www.onmay12.org

One thought on “Thousands of New Yorkers Take Over Wall Street”