On Saturday November 5th, the Alliance and its affiliates joined hundreds of thousands of activists from across the country for “Bank Transfer Day, a “deadline” of sorts calling for people to shift their funds from for-profit banking institutions to not-for-profit credit unions.

Actions from Alliance affiliates in Missoula, Seattle, Medford, Pullman, and Austin all sent local community members into Wells Fargo, Bank of America, and JP Morgan Chase to close accounts and call on local elected officials to do the same with our tax dollars.  And they also delivered a message to the Wall Street banks:   for too long, you’ve given our local governments a sour deal with high fees, lousy interest rate swaps, and poor returns on gambling with public pensions–all at the expense of cuts to vital services. 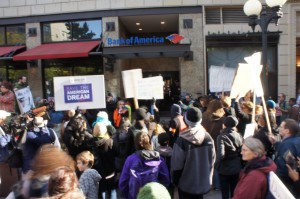 “Every dollar that the city moves out of Bank of America will go toward creating a new bottom line that means good jobs, healthy communities, and a government that fights for the 99 percent,” said Terri Sterling of Alliance affiliate Idaho Community Action Network.

The Alliance actions were a part of nationwide effort to take money back from Wall St.  As of Monday, November 7th, $32,613,130 has been moved out of “big banks” to local credit unions–all money that will be re-invested into our communities.