Released to the Press

Congress has failed to act on a commonsense, good-government approach to controlling health care costs. The significant resources the pharmaceutical industry has put toward influence and access has rendered Congress unable to act in the public interest. 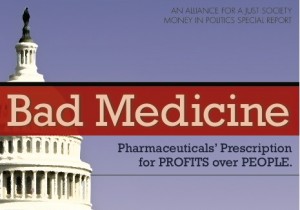 Bad Medicine: Pharmaceuticals’ Prescription for Profits Over People, released by the Alliance for a Just Society details the overwhelming influence of Big PhRMA on congressional outcomes and finds that the imbalance created by industry spending harms both the interest of the American people and our democratic process.

At issue is a bill Senator Jay Rockefeller introduced in April 2013 with 18 co-sponsoring Senators. The Medicare Drug Savings Act, would eliminates a provision from the Medicare Modernization Act that allowed pharmaceuticals to charge Medicare higher prices for beneficiaries eligible for both Medicare and Medicaid. The bill would require drug companies to offer rebates to these “dual-eligible” beneficiaries — who are generally low-income seniors or individuals with disabilities and nearly 50% of whom are people of color. These rebates were offered prior to the 2006 overhaul of Medicare. This provision would save the American taxpayers $141.2 billion dollars over 10 years.

Despite the emergence of this commonsense solution, progress has proven elusive.

The full report can be found at http://bit.ly/Pharmareport

The Alliance for a Just Society is a national coalition of state-based grassroots community organizations that address economic, racial, and social inequities to advance economic justice and generate increased power and sustain social change.