On a typically rainy Seattle morning, Tuesday, May 2, commuters stuck in rush hour traffic were treated to a  perfect view of a banner declaring peoples’ demands to big banks – PAY YOUR TAXES! The banner, hoisted up by 8-foot weather balloons and anchored by local students’ sailboat, reading “Wells Fargo-Pay Your Taxes”  flew above Portage Bay to send a message to local Wells Fargo board member Judith Runstad as she departs for the company’s annual shareholders meeting in San Francisco on May 3. 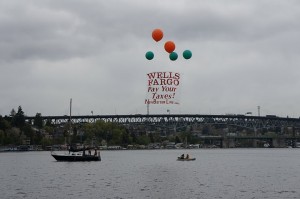 Runstad, who lives in a houseboat on the shores of Portage Bay, has sat on the Wells Fargo board for the last 13 years.  While Ms. Runstad sits on the board of local community groups such as the Alliance for Education and University of Washington Foundation, she authored a letter last year in opposition to defeated Washington tax initiative 1098, which would have taxed high income earners to fund public schools and increase access to higher education, the very things she allegedly works in service of. Additionally, Runstad’s husband donated a combined $100,000 to the defeat 1098 campaign. Ms. Runstad is seen as a business leader in Seattle and beyond, and it’s high time that she is called out for her hypocritical behavior. She should use her position on the board of Wells Fargo to make changes and address the toxic practices of the big banks.

Ms. Runstad & Wells Fargo’s actions are having a devastating effect on families, seniors, and students far and wide.  Kevin Knutsen, a member of Washington CAN!, has been trying to get back to school to finish his bachelor’s degree but rising tuition has kept him at bay. “In such dire times when people all over the state are tightening their belts, when funding for Higher Education is being slashed and as a result tuition rates are rising at an appalling rate,“ said Knutsen, “we are letting banks like Wells Fargo skip out on paying their fair share of taxes. We are letting banks like Wells Fargo steal our future so they have a little more money to gamble away on Wall Street. It is time to end tax loopholes for corporations and Wall Street banks.”

While community members are struggling to get by, Wells Fargo just last week reported a 48% increase in first-quarter profits. Even after enjoying soaring profits made possible by taxpayer bailouts, Wells did not pay taxes in the state of Washington last year due to a tax loophole that they have furiously lobbied Olympia lawmakers against closing. Federally, the company received a net tax refund of $3.5 billion in 2009.

Enough is enough. We must demand that big banks pay their fair share if they want to do business in our communities, and hold their leadership to the same standard. It‘s time to take action.

The Wells Fargo banner is part of a series of events held by Washington CAN!, Backbone Campaign and other partners to close corporate tax loopholes in Olympia, and the first of a series of national actions against Wall Street banks demanding that they do their part to fix the economy that they devastated by defrauding millions of homeowners, investors, and taxpayers.